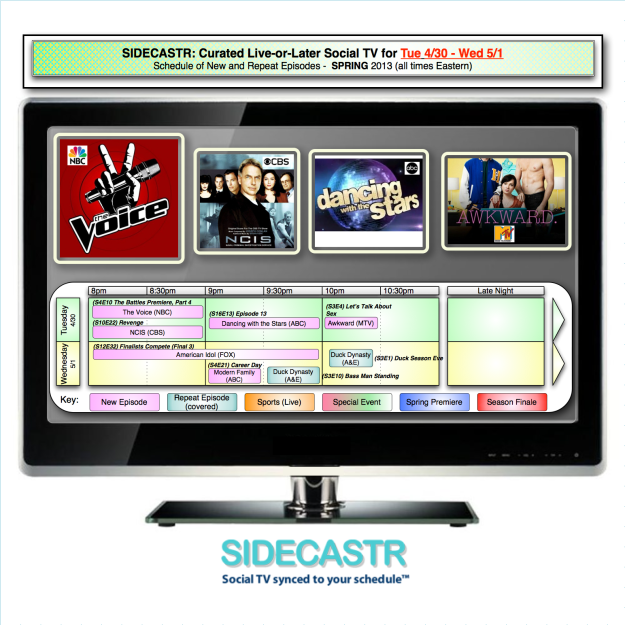 Big ‘Live or Later’ 5 show coverage night for Sidecastr’s brand of curated Social TV. Get it the Sidecastr for iPad app or follow our DJ’s live picks from the twitter stream at @SidecastrPicks

Click on Title block to jump to Sidecastr for iPad in the App Store.  Click on DJ links to visit the twitter pages of our fab superfan DJs

Sidecastr mines its database of curated, live-captured social content to offer up a revealing visual look into social media’s real-time reaction to the 2013 State of the Union Address.

View this document on Scribd

Since our initial 1.0 release of Sidecastr for iPad back on June 28th of this year, our product team has been working hard to bring out our first major iPad app update.  So today, we are incredibly excited to be able to announce to the Sidecastr community that Sidecastr for iPad 1.1 should be available shortly, most likely in the next 5 – 7 days, as soon as it emerges from the app store approval process!

Internally we call this version our “Facebook” release.  That’s because, you guessed it, in addition to our initial deep 2-way Twitter integration for sharing tweets with the show fan community, we now offer a carefully thought-out Facebook integration that facilitates group conversations between Facebook friends who watch the same shows – and this is huge – even if they’re not all watching at the same time!

As you probably know, there are other second screen apps that integrate with Facebook.   In theory, it’s wonderful to be able to chat with friends who are watching the same show at the same time in the same timezone as you are.  In practice, because of time-shifting, device shifting, and time zone differences, most people find that they’re solo or, if they’re lucky, able to find only one or two other friends online concurrently.  How sad :(.

Sidecastr’s new ‘My Friends’ feature fixes all that.  As a DVR for social TV related comments, we capture and play back friends’ sidecasts in sync to each person’s own unique viewing time frame. So if I’m watching The Voice live on air in NYC and make a comment, my friend in Boston who adds a 10 min lag to skip commercials, my friend in San Francisco who can’t watch for 3 hours, and my 3rd friend who watches episodes the next day on Hulu will all see my comment appear in the app at the exact moment in the show I posted about.  You and your Facebook friends’ sidecasts and replies all just filter into the new ‘My Friends’ smart-category once you each make the one time link to Facebook from Sidecastr’s settings.  Of course if you’re all watching live at the same time it all just works too.  It’s easy.  And it’s amazing.

Here’s the complete list of What’s New points as submitted to the app store:

This week marks the start of yet another new series Sidecastr will be covering for the summer that we expect will be highly social: Beverly Hills Nannies (MTV).  Also, for baseball fans, we will be covering the 2012 MLB All Star Game from Kansas City. And get ready for next week’s season 5 return of the highly rated Breaking Bad (AMC).

Here’s our schedule for the week:

It’s July 4th week but most of the top Social TV summer series being covered by Sidecastr are still sizzlin’ along with new first run episodes.  Exceptions are: Pretty Little Liars ans Suits, which both take a break this week on airing new episodes.

Here’s our schedule for the week:

Mad Men has its season 5 finale tonight at 10pm ET.  On Saturday we released beta 0.55, our Apple approved App Store version.  We have a few pre-release beta slots available, so if you own an iPad running iOS V5.x, and are a fan of Mad Men or any of our current summer or shows covered in the past, click here to register: http://tflig.ht/JiyOVA.

The final 1.0 release is sporting our instantly popular Auto-Scroll feature, which may just become the de-facto way of using Sidecastr.  We refer to it as “couch potato” mode: just activate it from the top bar of any sidecast detail page, sit back, watch the show, and let the app pop one (synchronized) sidecast at a time onto the iPad’s screen.  To stop, write a reply, or browse to a referenced web page, just tap once.

Sidecastr
Create a free website or blog at WordPress.com.